Monet Jowers (horn) and her beloved horn, Hubert Sibelius, are eager to join the music department at Chapel Hill this year.  Monet has been a Florida All-State Band member for five years.  She spent two summers in Vermont at the Kinhaven Music School, studying piano and horn under the instruction of Mimi Solomon and Carolyn Wahl.  She has a background in piano studies, and has performed as a piano concerto soloist with Space Coast Symphony and her high school orchestra.  In her senior year, Monet attended the University of North Carolina School of the Arts in the studio of Dr. Maria Serkin.  She played principal horn in the Winston-Salem Symphony Youth Orchestra and won an opportunity to perform as a concerto soloist.  Most recently, Monet and Hubert became first-place national winners in the MTNA Senior Brass Division.  Besides her music studies, Monet is pursuing a biology degree, and takes a keen interest in epigenetics, evolutionary biology, and personalized medicine.  Sīc sē dēdicāt, in ōtiō labōribus fidēque in Chrīstō. Frances Norton (violin) is a sophomore from Chapel Hill, NC. Frances began studying violin at an early age and has studied with Dr. DiEugenio since high school. She has been actively involved in Mallarme Youth Chamber Orchestra and Triangle Youth Philharmonic throughout high school and was concertmaster of the Carrboro High School Orchestra. She attended Kinhaven Music School in summers 2017 and 2018 and studied with Klaudia Szlachta at Boston University Tanglewood Institute in the summer of 2019. Frances was the first place winner of the Music Teachers National Association North Carolina concerto competition in 2019. Frances will study violin performance and computer science at UNC. 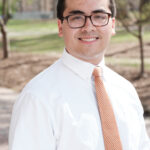 Ryan Phillips (clarinet) is a junior student from Fairfax, Virginia. He has been playing the clarinet since fifth grade and studied with Kenneth Lee throughout middle school and high school. Ryan has played in wind ensembles, symphony orchestras, chamber groups, and theatrical pit orchestras. He has played in such groups as The Capitol Symphonic Youth Orchestra, Virginia Winds Academy’s Symphonic Winds, VBODA Senior Regional Orchestra, VBODA District XI All-District Symphonic Band, and VBODA All-Virginia Concert Band. He has participated in several solo competitions through the Northern Virginia Music Teachers Association and won the NVMTA Achievement Awards Competition in May 2019. At UNC, he is pursuing a second major in English and is a member of Honors Carolina. Outside of performing, Ryan enjoys reading, writing, and keeping up on new films and music. He is very grateful for the opportunity to be a Kenan Music Scholar. Ryan is a student of Donald Oehler.